Just a few days after Honda unveiled its Fuel Cell car, German car maker Audi has revealed its stake to fame. The A7 H-Tron Quattro is the company’s new hydrogen fuel cell-powered vehicle and takes an innovative approach towards hybrids.

The car integrates fuel cell with a plug-in battery system so you will be covered even when you run out of your hydrogen fuel. The car can drive an extra 31 miles using the battery juice of its 8.8 kWh lithium-ion battery so you can safely reach your fill up stand. With fuel cell and battery backup, the car gets a range of about 500 km.

When running on hydrogen, the car takes miles per gallon ratio to a whole new level. Using fuel cell and four H2 tanks, the car offers the equivalent of 62 miles per gallon. This can be the dream car of every Indian who asks “what’s the mileage?”

On the power front, being an Audi, the car won’t disappoint. The H-Tron Quattro has a total power output of 398.3 pound-feet of torque. The car can go from 0-100 km per hour in 7.9 seconds and has a top speed of 180 kmph. The car’s total range is a whopping 500 km, which puts it even further than most of the conventional cars of today.

According to Audi, the fuel cell stack has an efficiency of about 60 percent, while the electric motor has an efficiency of 95 percent. It is though important to know that fuel cells are still experimental technology. Collecting and storing hydrogen for fuel cell-driven cars is still a high cost and high efforts issue because of the combustible nature of the element. So the best option for the fleet of the future is electric vehicle. Considering the fact that Tesla has released all the patents of its phenomenal electric engines, it’s time the major car makers take the initiative and use technology to bring a change to our economy. While doing this, they will unleash an industrial engineering job growth that would usher in the new techno-industrial age. After all, the entire population of automobiles on the road has to be replaced or retrofitted if we want a livable planet in the coming future. 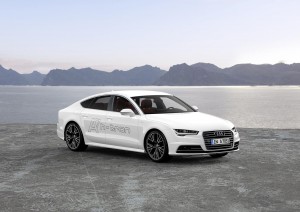