The Frankfurt Motor Show recently wrapped up and what a show it was. The motoring event saw some of the best new cars and concepts the motor vehicle industry had to offer. From the Alpha Romeo Guilia to the Porsche E Mission concept, the show had something for every car enthusiast.

We’re focusing on some of the most exciting concept cars that were featured at the Frankfurt Motor Show.

This was undoubtedly one concept car that stole the show at the event. Porsche unveiled its new four-seat concept car that promises to charge faster than your smartphone. The Mission E concept car can charge up to 80% in just 15 minutes beating Tesla’s Superchargers. The car operates at 800-volts which is what allows it to charge in no time.

The Mission E reaches 100 kilometers (62 miles) per hour in 3.5 seconds. The 600-horsepower electric car has a range of more than 500 kilometers on a single charge beating Tesla’s Model S by actual miles.

Mercedes-Benz showcased a slew of cars: the C-Class Coupe and S-Class Cabriolet in two flavours each, and this work of art, the Concept IAA. This little piece of futuristic design is all about the body. This car can change its shape at higher speeds to cheat wind and provide maximum aerodynamics. IAA in the name stands for Intelligent Aerodynamic Automobile. The car can hide away several exterior features, elongate its rear to about 15 inches, retract bumpers for extra air-flow, flatten the active wheel rims, changing their cupping from 2 inches to zero. All this is done with a push of a button or automatically at 50 mph. 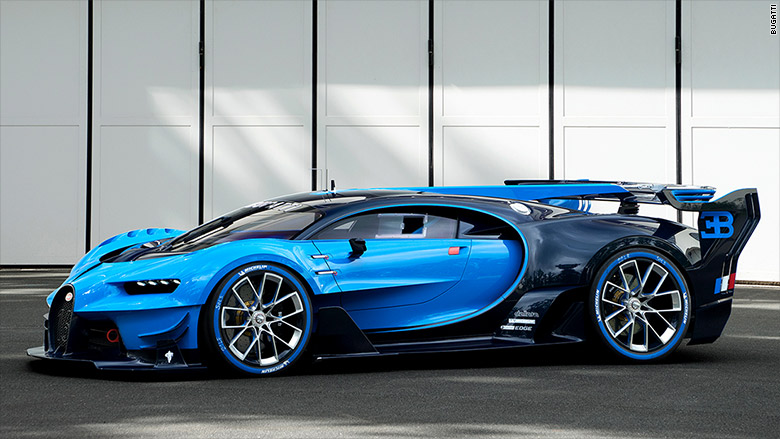 This could be every gamer’s dream come true. Bugatti is set to debut the Bugatti Vision Gran Turismo, and as the name suggests, the model is the real, drivable version of the virtual one featured in the Gran Turismo video game. Though no official details on the speed and power of the car have been revealed, judging by the previous Bugatti line-up this concept is likely to have 1500 horsepower, that will make a 0-62 mph jump in 2.3 seconds with a top speed of 288 mph. But this is all conjecture at the moment. Audi came out with a more realistic EV than the Porsche, the E-Tron Quattro. Unlike the Porsche, Audi declared the production of the electric vehicle, scheduled for a 2018 debut. The car has 500 horsepower and can go from 0-62 mph in 4.6 seconds, with an electronically governed top speed of 130 mph.

Though this may not compete with the Porsche in terms of speed, but it is the most realistic in terms of production. It also has a slower charging time at 50 minutes, and can go as far as 310 miles on a single charge.

Citroën came out with a concept car that was not electric. The Citroën is a simple, colourful four-wheel drive that the makers call a “BnB” – Beach and Breakfast.

This open-air car has been designed to go anywhere with ease. The car can withstand rainy days with its drainage outlets in  the floor. Citroen advanced design chief Frederic Duvernier says his creation is “a ‘concept’ concept” – which mean this car was purely for show.