Mclaren is all set to launch the production version of the new P1 GTR at this year’s Geneva Motor Show. As the name suggests, the GTR is based on Mclaren’s P1 hybrid road car, all decked up in Mclaren’s most famous racing liveries. The limited edition, Mclaren P1 GTR flaunts the new yellow and green livery, taking inspiration from McLaren F1 GTR chassis No. 06R, which was raced at LeMans back in 1995.

Barring the looks, the P1 GTR features several notable changes under the hood. Compared to its street legal sibling the P1, the GTR is about 3 inches wider and 2 inches lower. A set of 19-inch alloys are mounted with slick Pirelli tires, while the powering the wheels is a 3.8 litre twin turbo V8, churning out a massive 986 bhp of horsepower, with the electric motor producing 197 hp out of the total. 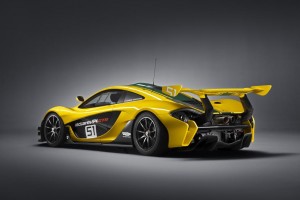 The PI GTR is entirely track oriented, hence windows have been replaced with polycarbonate, while the glass roof and engine bay cover are made out of carbon fibre. The P1 GTR also gets a new spoiler, which is about 4 inches higher than the P1, making the entire package more than 100 pounds lighter the its street legal sibling the P1.

The P1 GTR will be alongside the new Mclaren 675 LT on March 3 at the Geneva Motor Show.