Audi has announced the most powerful version of  an Audi supercar in India with the launch of the R8 LMX. This turbo charged beast is priced at Rs.2.97 crore (ex-showroom Mumbai) and comes equipped with laser headlamp technology; the first ever car in India to have this feature.

The car was first unveiled at the Paris Motor Show, and features a 5.2 litre V10 engine capable of generating 562bhp, which is 10hp more than the potent R8 GT. The engine is mated to a seven speed gear automatic gearbox and Audi claims a top speed of 320 kmph while the car zips from 0-100 in a mere 3.4 seconds. 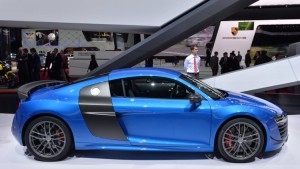 But what really sets the LMX apart is its cutting edge laser beam headlights. These headlamps are automatically activated 60 kmph onwards which offer better visibility than conventional headlamps, and has twice the range of all LED headlamps. Each headlamp is equipped with one laser module, which contains four laser diodes. It emits bright white light and can detect oncoming traffic to adjust its light pattern so as to prevent blinding oncoming traffic.

Even BMW unveiled  its M4 concept with its laser latest lighting tech at CES 2015 along with an automatic ‘Selective Beam’ anti-dazzle feature that prevents blinding of the oncoming traffic.