Ready for the Indian Summer : Most Awaited Cars to be Launched Soon

With the Auto Expo 2014 , this year has seen some of the largest releases of cars in India. With the automobile market facing slump, the companies  are desperate to revive the automobile segment. They are doing so by releasing new cars and giving discounts and offers on old ones. This summer looks exciting as there is a whole range of cars lined up for there summer debut. Here are some of them: Toyota recently launched the Etios Cross for the Brazilian market and it is expected to now make its Indian debut at the 2014 Auto Expo. Much like the Volkswagen Cross Polo and the Ford EcoSport, it will be the Japanese automaker’s entry into the rapidly expanding compact crossover segment. It has been spotted running in and around Pune which means that it is likely to have got its ARAI approval and will go on sale shortly after the Auto Expo.

The Toyota Etios Cross is a beefed up version of the standard car and much like the Cross Polo, it gets a large plastic based body kit. The interiors and the feature list remain the same as the standard car with the exception of some new seat fabrics and trim accents. We expect that Toyota will offer the Etios Cross only in the top spec petrol and diesel variants.

The Toyota Etios Cross will compete with the VW Cross Polo, Ford EcoSport, Renault Duster and the Nissan Terrano of which the latter two will be in the lower spec variants. The 2014 Corolla as we had said earlier has been derived from the Furia design philosophy. While it is a complete departure from the current vehicle in terms of its aggressive appearance, it is however, more conservative than its American counterpart. All four wheels have extremely flared arches and the doors slope forward on the side. At the back, Toyota has retained some of the aggressiveness from the American spec car due to the wrap around tail lamps.

Design bits are expected to be in beige with standard fabric for the seats. However, the top-spec variant is expected to get fake wood inserts as well beige leather upholstery trim for the seats. Standard features across variants are expected to include driver and passenger airbags, ABS with EBD, rear AC vents, parking sensors and electronically internally adjustable OVRMs. On the higher specs, we can also expect front parking sensors, Xenon lamps, touch screen infotainment system as well as electronically adjustable seats.

The Toyota Corolla competes with Skoda Octavia, Chevrolet Cruze, VW Jetta and the Hyundai Elantra. We expect that this new car will be priced between Rs 12 lakh to Rs 17 lakh for the top-spec diesel variant. The 2014 Ford Fiesta gets a similar fascia to that of the Ford EcoSport which in turn is in line with the American automaker’s family face and one Ford global programme. Its most striking feature is the Kinetic design Aston Martin-esque grille which is now is a standard feature across all its models.

The facelifted Fiesta remains the same as the outgoing model in terms of the interiors so this means fabric seats, leather- wrapped steering wheel reverse parking sensors, climate control (the last three being applicable for Trend and Titanium), airbags and ABS with EBD. However, what’s new on this model are the rain sensing wipers, push button start, ambient lighting and Ford’s patented SYNC technology which made its Indian debut with the EcoSport compact crossover.

We expect that Ford will price the facelifted Fiesta in the range of Rs 7.5 lakh to Rs 10 lakh but may price it even lower if it is only going to produce diesel models for the domestic market. It competes with the Honda City, Renault Scala, Nissan Sunny, VW Vento and the Skoda Rapid The A3 sedan is Audi’s answer to Mercedes-Benz CLA and BMW 1 Series sedan. The sedan was unveiled at the 2013 Geneva Motor Show and is set to debut in India at the 2014 Auto Expo, to slot in below the A4 as one of the entry-level models for the German marque. This sedan is smaller than the A4, so the space will also be a relatively less. The front seat space won’t be much of an issue, but the rear could be a little cramped. The Audi A3 sedan is expected to be launched in April 2014. 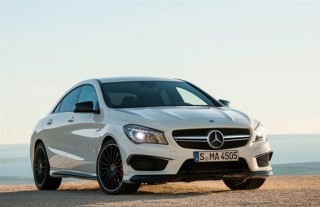 The car was unveiled earlier this year at the 2014 Delhi Auto Expo and is speculated to be launched here in July. While the ‘regular’ CLA will be locally assembled at the company’s plant in Pune, the CLA45 AMG will be imported directly as a completely-built-unit (CBU). The 2.0-litre direct injection turbocharged motor produces 360bhp and 450Nm of torque which is good for an electronically limited top speed of 250kmph. Mercedes-Benz is no longer the best-selling luxury car brand, thanks to Audi and BMW. The German manufacturer has set the target to get back on top by 2016 with its new range of MFA (Modular Front Architecture) platform-based cars.