Showing its commitment to the Indian market, French car maker Renault made the global launch of its concept car KWID besides introducing new variants of models Fluence and Duster here at the 12th Annual Auto Expo at Greater Noida.

This is the first time that Renault has chosen to reveal a concept car outside Europe and it speaks volume about its confidence and commitment to the Indian market.
The KWID has been designed with inputs from Renault Design India and is targeted at meeting the needs of young customers. The interior of the KWID is designed to serve as a snug cocoon and is inspired by a bird’s nest. The KWID is two-wheel drive but has the demeanor of an off-road car with chunky wheels resembling an off-road buggy. 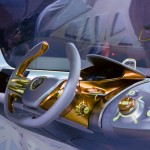 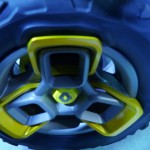 The vehicle’s seats, suspended over a solid base in white, give an impression of lightness, while its 2-tone elastomer material provides a sense of brightness. The KWID also features rear air conditioning with controls on the driver seat’s back as well as ventilation through concentric perforations. The dashboard is an integrated tablet for commanding the navigation of the Flying Companion.
Besides the concept car, the company also showcased latest versions of its best-selling model Duster and sedan Fluence which would be available in the market by the end of this month. The Fluence comes with a new visual facelift, mainly new headlights, a new grill and a new front bumper in addition to several smaller changes. The Fluence  also receives minor upgrades in the interior department with more gadgetry added to the already well rounded package. This new variant, the Adventure features blacked out headlamps, bumper addons with inbuilt driving lamps and additional plastic cladding bits on the side giving the Duster a tougher appeal. The new Renault Duster will also feature a set of gunmetal grey wheels that match the plastic cladding giving the Duster a distinctively sporty look. Renault also features the electric ZOE and a sporty variant of the Renault Megane hatchback along with their 2013 Formula 1 car. A slightly customised version of the Renault Pulse and the Renault Scala were also on display along with the newly launched Renault Koleos facelift.
Categories
Breaking NewsLatestRenault
Tagged
auto expoautogyaanconcept cardusterduster adventurefluencekoleosKWIDKWID launchMUVNew LaunchpulseRenaultRenault Dusterrenault fluencescala
0