The much awaited Renegade range from UM Motorcycles is all set to make its debut on Feb 3, at the Auto Expo, 2016. The American Motorcyle brand which brings to India the Renegade range in a 50:50 joint venture with Indian automotive maker Lohia Auto, will unveil its Renegade range of cruiser motorcycles – Renegade Sport S, Renegade Commando and Renegade Classic.

Talking about the Launch, UM Motors’s Director- India, said,” We are thrilled and excited to bring our world-class Renegade range of cruisers, which have been designed and customized for the Indian market. The Renegade series will give Indian buyers a taste of high quality, world class cruisers which are built to tackle the diverse Indian terrain with ease and finesse. UM Motorcycles stand for design, innovation and quality all at affordable prices. We are confident that India will be delighted with our product offerings”

Present also at the event was Ayush Lohia, CEO, Lohia Auto Industries. He said,” We are extremely excited to partner with UM Motorcycles and bring their globally successful and much-awaited motorcycles to India. With this announcement, we aim at a considerable slice of the market share in the dynamic, yet extremely competitive mid-size capacity cruiser market. This is just the beginning and we have a lot of surprises in store for motorcycle enthusiasts in terms of products, sales and after sales.” 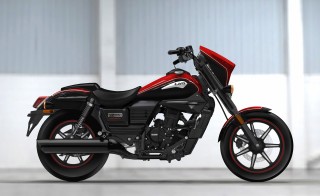 UM International in this alliance with the UP-based Lohia Auto has invested Rs 100 crore for expanding their business to India. According to the company,  manufacturing for the renegade range is already underway at the Lohia Auto’s Kashipur facility in Uttarakhand .

Initially the Motorcycle will be available across major cities in the country. The company later plans to expand there distribution network to tier 2 and tier 3 cities and towns so as to make it a household name.