British car brand Mini, makers of the peppy Mini Cooper hatch has revealed a new concept car called the Clubman Vision concept for the Gran Turismo 6 racing game. Available as part of a free update on the racing simulator game, the Clubman GT6 gets a beefed up front hood and an elongated design with a longer-roof.

Internal mechanicals have not yet been disclosed, though it does churn out 395 HP and zips from 0-60 mph in just 3.5 seconds, which is nearly twice than any road-going Mini produced till date as the drivetrain is powered by all four wheels. 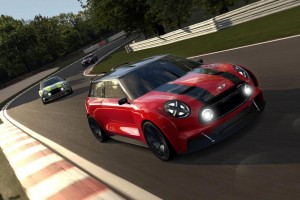 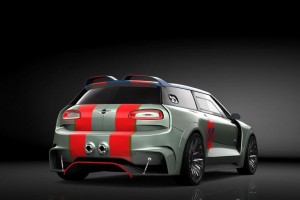 It gets six different exhaust pipes, two on each sides and two on the back along with some track oriented bodywork. We have a number of spoilers, added ventilation a wider wheel base with 22 inch rims – this is one angry Mini indeed. A vibrant green paint job compliments giving it the final futuristic aesthetic

The Mini Clubman Vision Concept also gets a pretty impressive press video. Do check it out below: