Some would say Chevrolet has solved two of the most perennial problems with modern electric cars: a long driving range along with a reasonably economical price tag. With the announcement of Chevrolet Bolt, at the ongoing Detroit Motor Show, its seems the company has unleashed the secret to building a successful electric car.

The new Chevy Bolt concept car can travel a hefty distance of 200 miles between charges and comes at a reasonable price tag of $30,000. The four-door hatchback is expected to go on sale in 2017. Its closest rival Tesla’s Model S addressed a part of the problem and can travel 256 miles on a single charge, but has a significantly higher price tag of $80,000. While other electric vehicles including Nissan Leaf can only go about 80 miles on a full charge. 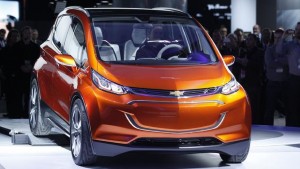 Industry experts believe that if the car can deliver what it promises, the Bolt could bring about a widespread adoption of electric cars, especially when fuel prices are on a constant rise. The new Bolt could be “the first mass market EV success”, said an industry veteran.

Meanwhile, Tesla Motors said they were quite stoked to see the Bolt concept unveiled yesterday.

We are always supportive of other manufacturers who bring compelling electric vehicles to market, we applaud Chevrolet for introducing the Bolt and are excited to learn more about the product.

As of now, no official launch date has been announced, but it is for certain that the car arrive in the market. The Bolt is production ready and has the look and feel of BMW’s i3, a spacious mid-sized hatchback. If this new EV can really go 200 miles without costing as much as the Tesla, the Bolt certainly has the potential to become a successful mainstream electric vehicle.

Also at the Detroit Motor Show, Chevrolet announced the second generation Volt. The redesigned car is most likely to be launched in the market by year end for under $30,000. It has a 50 mile EV range with a hybrid economy of 40 plus MPG. Do check out the official unveiling video below: