Renault has officially unveiled its highly anticipated MPV ‘Lodgy’; the cars first image has now been officially revealed. The MPV’s most talked about feature is its 2.810mm long wheelbase, creating enough interior space in the vehicle. There is plently of space on offer in the second and even the third row, which should make the Lodgy a very comfortable and spacious vehicle.

On the exterior, the Lodgy features a new chrome bar grille sporting a chunky Renault logo along with revamped headlamps. While interiors will have similar bits taken from the Duster, including the speedometer, infotainment system, steering wheel and air-vents. 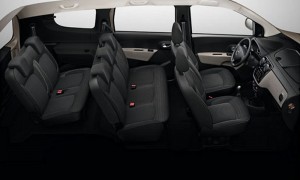 Moving to the internal mechanism, the Lodgy will be powered by the similar 1.5 litre dCi engine as the Duster, which churns out a torque of 248.1 Nm, notably more than Toyota’s Innova.

The car is expected to go on sale around February 2015 at a cost of somewhere between Rs.8-12 lakh. The newly unveiled Lodgy has a lot of potential for the Indian market and could pose as a serious competitor to compact MPV’s like Maruti Ertiga and Honda Mobilio, including the popular Toyota Innova.