There Once Was a Supersonic Passenger Aircraft Called Concorde

Human technology evolution has for the most part followed an upward path. From letters, we went to telephony and now we’re in the age of the internet. From walking on our feet, we got horses and then moved on to motorised vehicles and ultimately invented flying aluminum monstrosities called Airplanes. We have come a long way from the time when the Wright brothers took their flying machine for a spin. From then on, there was no stopping us from the skies. We sure have come a long way and reached supersonic speeds and then we pulled back. The Concorde was a legendary plane, and we decided to pay tribute to this marvel of engineering.

The Flash of the Skies Concorde dominance supersonic passenger jet space was and is unchallenged. The plane had a take-off speed of 402 km/h and its top cruising speed is 2172 km/h. It was the first plane to travel across the Atlantic in under four hours. In fact, the French model of Concorde covered the distance in three hours and 32 minutes setting up a new world record. Normal aircraft’s like the Boeing 747 take upwards of 7 hours to complete this 5500 km journey.

The plane circumnavigated the planet, covering a distance of 45445 km in just 29 hours and 59 minutes. Phileas Fogg’s journey around the earth would have been much faster and a lot less eventful if he had a Concorde.

Concorde was jointly designed and developed by the British and French. It plane 62 metres long and had a wingspan of 25.6 metres. It stretched almost 6 to 10 inches mid-flight because of the heat generated by the powerful engines. To take care of this stretch, the plane was painted with a special white paint.

The plane got its lift from four Rolls Royce/SNECMA Olympus 593s engines. The Aircraft’s four engines took advantage of what is known as ‘reheat’ technology, adding fuel to the final stage of the engine, which produced the extra power required for take-off and the transition to supersonic flight. The engine generated 38,000lbs of thrust with the reheat technology.

The plane was loved by the pilots who flew it. According to them, it was truly a pilot’s plane. The accident of Air France Flight 4590 that led to the demise of Concorde.

The Concorde was not an easy plane to maintain. The tires of the planes had to be changed after every landing as the landing speeds of 300kph were really brutal for the tires. It also needed a runway length of 3,600 metres to achieve its dashing takeoff speeds.

On 25th July 2000, Air France Flight 4590, crashed in Gonesse, France after departing from Paris Charles de Gaulle en route to John F. Kennedy International Airport in New York City, killing all 100 passengers and nine crew members on board the flight, and four people on the ground. It was the only fatal accident involving Concorde. But it tremendously decreased passenger confidence in the aircraft, and it led to low passenger number following the accident.

Concorde may have now become a part of the history books, but it has left a lasting legacy behind it. It was, of course, a luxury ride which cost $6500 to start with so it generally was a bourgeois transport medium.

Citing huge maintenance and fuel bills along with low sale of tickets, the Concorde fleet was finally retired. Even the lack of support from Airbus led to the demise of this great mechanical marvel. While the British Airways bid adieu to the plane on 24th October 2003, Air France’s final Concorde flight took place on 27th June 2003. 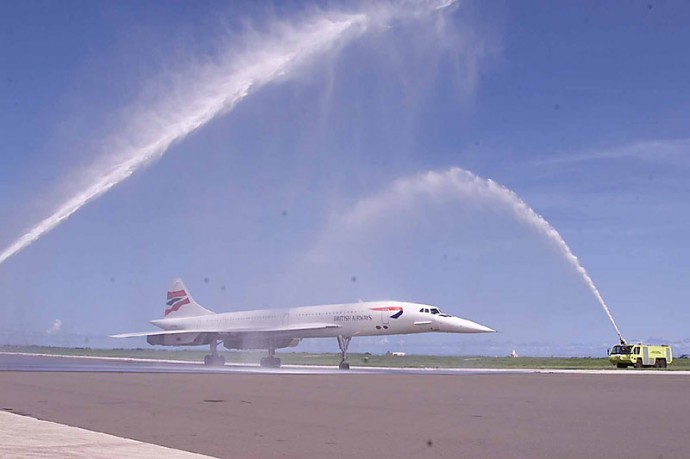 Concorde getting a farewell in the Carribean.

It has been 45 years since the first takeoff of this awe-inspiring aircraft and 11 years since its decommission, but the lessons learnt from it are still utilised. Technologies that evolved from the Concorde for later use in Airbus aircraft include fly-by-wire flight controls, full-regime autopilot and auto-throttle for flight management, high-pressure hydraulics, and the use of advanced manufacturing techniques.

Of course, the sad fact remains that we achieved so much, but then we pulled back instead of pushing further to make the technology more accessible for a larger population. It can be seen equal to the moon landings. At their peak, they inspired a generation to aim for the heavens, but then, because of multiple causes they just became a page in human history. Concorde will always hold a special mention in the aviation history as a pioneering technological achievement and it just might inspire the next big thing in aviation technology.