BMW i8 Concept’s Technology Teased Ahead of CES 2016

BMW is ready to take the stage at the Consumer Electronic Show in January next week. The carmaker has teased an image of what it plans to showcase at CES 2016. It is an updated version of the BMW i8 Spyder concept that was first seen in 2012. The updated version puts more emphasis on the interiors, according to the teaser.

BMW has stated that its main focus of the concept will be next-gen interior design and technology.  BMW says the concept will “demonstrate what the interior and the user interface of the future might look like.” BMW will showcase a new technology, called AirTouch, which uses simple flat hand gestures to control the entertainment, navigation and communication functions. Basically, AirTouch will let you operate the display in the vehicle to work without having to make contact with the screen. 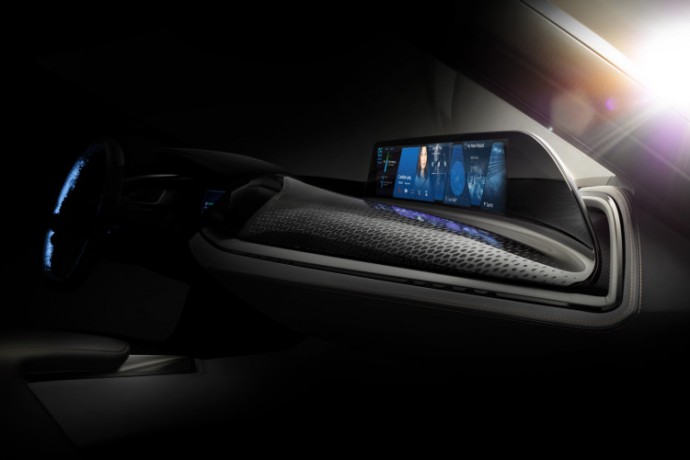 The teaser shows the absence of any physical controls. Instead, the display, that’s angled towards the driver but is on the front passenger side, relies solely on hand movements. Special sensors located near the center console monitors record hand movements and converts these to instructions for the vehicle.

The AirTouch menu has been developed to reduce the number of steps it takes to make a selection. For example, when activating the phone pad, the system automatically brings up contacts or call lists to the top select level so that a call can be made with just one more action. According to BMW, this allows the driver to focus more on the road.

BMW has not confirmed when the AirTouch will be made consumer ready, but the company does state that such systems make more sense as we move towards autonomous vehicles.