Σtos is an Autonomous BMW i8 that Comes with a Drone

Rinspeed is a Swiss automobile manufacturer that is known for creating concept cars with bizarre ideas fitted into a brightly coloured package. Most of their time is spent on creating absolutely wild cars that begs one to question what one truly knows about cars.

Recently, Rinspeed took BMW’s i8 as the inspiration for its own Σtos (etos), which will debut at the CES 2016. The Σtos is completely autonomous. In fact, the car is so autonomous that the driver needs to read in the car just to have something to do. In their press release, Rinspeed stated that, “the technical highlight in the interior of the “Σtos” is no doubt the folding and retracting steering wheel from ZF TRW. As if by magic, it disappears in the dashboard in a few seconds. This creates lots of space in front the driver who can grab and read a book in comfort the old-fashioned way or can work in a relaxed atmosphere.”

But here is where things get really interesting. The Σtos comes with a drone that has its own landing pad at the back of the car made up of Gorilla Glass-covered array of 12,000 LED lights. This drone can tip valets, trades stocks for you and even pick up flowers, among other things. All of this is possible via Harmon Connected Car infotainment System.

The drone can be programmed as “an electronic message board or a visual dancefloor.” If the technology that the promo video boasts of actually does come true, the Σtos will be one of the most incredible concept cars ever. Now while the exterior may not look too different or aren’t as sleek as the BMW i8, its the interiors that truly deserve your whole attention. The interior looks furuturstic but it’s madness. The steering wheel folds in half and then retracts into the dash to allow the driver to have more room during autonomous driving to read a book.

So you may want to add this to  the list of crazy products to watch out for at the CES 2016 in January. 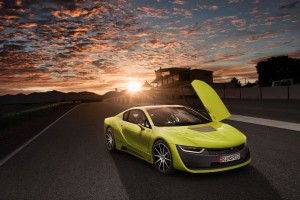