Electric car manufacturer nanoFlowcell is all set to unveil its new all electric four-seater – the Quant F  saloon at next month’s Geneva Motor Show. The company says the Quant F is an entirely reimagined version of the Quant e-Sportlimousine and is capable of 800km (500-mile) all-electric range.

Under the hood, the Quant F is powered by four electric motors churning out a peak output of 1075 hp for a limited time along with a maximum rated voltage of 735V. Meanwhile, the company’s Chief Technical Officer Nunzio La Vecchia says the car is powered by the firm’s in-house flow cell battery storage technology with an ionic liquid. 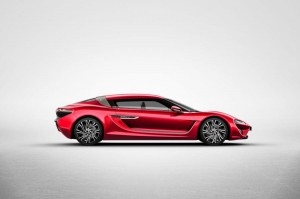 The transmission is a new, in-house-developed two-speed automatic, “the likes of which has not yet existed”, says nanoFlowcell. Top speed is reported to be 186mph.

Moreover, the four wheel drive saloon can also convert itself into a rear wheel drive, as the front axle gets declutched and runs in idle mode.

The car’s outerbody is made out of a carbonfibre monocoque, and is 100-percent homologation ready, while the interior is 90 percent, making it one of the most efficient zero emission vehicles known. A two stage aerodynamic aerofoil is automatically activated at above 50mph, which the company claims provides more downforce and increases the grip on the road.

Back-lit crystals are embedded within the headlamps, that project a ‘Q’ when switched on. The firm says this new light technology gives the look of eyes with pupils and gives more personality to the cars’s front end.