Next-Gen Skoda Superb: All You Need To Know

Skoda is foraying into new territory with its third generation Skoda Superb, touted as the most upmarket car the brand has ever built. Since its launch in 2001, Skoda has managed to sell more than 700,000 units worldwide, and the Czech manufacturer is aiming at a much higher figure with the new saloon.

Now most of the details have been revealed along with an official view of the cabin. The car will be based on the Volkswagen Group’s MQB architecture and sports a much refined luxury car look over its current gen counterpart.

We want the new Superb to sit above cars like the Vauxhall Insignia. We want to be the most technological model you can buy in this class.

Here’s everything you need to know about the next gen Skoda Superb.

Going by the sketches, which resemble concept more than production, Skoda Superb 2016 is set to feature an entirely revamped design. The car looks much slicker than its predecessor. 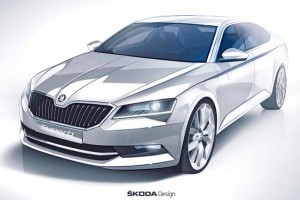 Up front, the car sports a butterfly shaped grille along with a set of larger jewel-like headlamps. The car now looks more aggressive with sharp character lines running along the car while flared alloy wheels to add to the whole sporty demeanour. In addition, a more sporty roof-line along with chrome edged windows gives a neat finish.

Skoda has teased the first official image of the Superb’s cabin ahead of its official unveiling in Geneva. And going by the images, it’s quite evident the Czech firm has spruced up interior quality and functionality.

In addition, Skoda claims that the legroom is twice of what is available in the Insignia. In addition, the boot space is now at 625 litres (with seats up) and 1,760 (seats down). Meanwhile, the tech inside has been spruced up as well. The new Superb is likely to sport a lot of gadgets found on VW’s new B8, such as a new gen infotainment system that will be compatible with Apple’s CarPlay. In addition, the car is expected to borrow the plug-in hybrid technology from the recently launched eight-generation VW Passat.

In the international markets, the new Superb gets five petrol engines. From a 123bhp 1.4 litre with active cylinder management to a 276bhp 2.0 litre, along with three diesel variants from a 118bhp 1.6 GreenLine to a 187bhp 2.0; t he engines will come from the 2015 VW Passat range mated with both manual and DSG units.

The India bound next gen Superb is likely to retain the current engines with the same 1.8 litre TSI turbocharged petrol engine, and 2.0-litre TDI turbocharged diesel motor. While, a six-speed manual transmission is likely to come as standard, along with a 7-speed DSG unit as an option.

The next gen Superb hybrid will feature the same 154bhp 1.4 litre TSI engine and a 107bhp electric motor from the new Passat. Though, the hybrid is expected to launch sometime in 2016.

The price of the next gen Skoda Superb will most likely be declared at the time of its launch, though we can expect a 10-12 percent price hike over the current gen model.

The 2016 Superb will make its official debut at Prague and is likely to hit the European markets a few months after that. Hence, we can expect the new saloon to be launched in India sometime in October 2015.