McLaren Reveals a Toned Down 625C Exclusively for Asia

McLaren has revealed its first regionally tailored model 625C. The new 625C (C stands for Club) is essentially a 650S with less power and a softer suspension built exclusively for the Asian market. McLaren entered the Chinese market in September 2013 and is set to sell every third car it makes there this year. The British sports carmaker said that the McLaren 625C may look like McLaren 650S, but it focuses on day-to-day drivability and comfort. The 625C is being launched in Hong Kong and will be available exclusively in the Asia Pacific region. It’s powered by McLaren’s signature 3.8-liter twin-turbo V8, but carries the same 616-horsepower output as the 12C touted before its demise. It also gets a softer rear suspension to make the Club model both “more refined and more accessible” than the 650S.

It will still do 62 mph in 3.1 seconds while 124 mph comes in 8.8 seconds (for the Coupé). McLaren also managed to keep maximum speed at 207 mph for the fixed roof version despite the lower power compared to the 650S. The 625C is equipped with new dampers and a revised suspension setup which includes softer spring rates at the rear – giving it what McLaren calls “the most refined ride of any of its models.” 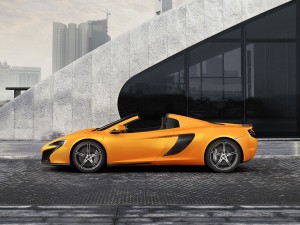 Both the McLaren 625C Coupe and McLaren 625C Spider will be first available in Hong Kong, but other countries in the Asia Pacific region will get the cars in the following months.