The BMW Concept Active Tourer was unveiled to the world at the 2012 Paris Motor Show. Now BMW has premiered a sturdy, adventurous variant called the Concept Active Tourer Outdoor. Showcased at OutDoor Friedrichshafen, a trade fair held this month in Germany, the wagon is tweaked with new materials, accessories and ConnectedDrive features for those who spend more time under the sky, than inside their cars. The same plug-in hybrid drive system as found on the original Concept Active Tourer handles the power duties under the hood of the Outdoor variant. A transversely-mounted, 1.5-liter turbocharged three-cylinder engine paired with an electric motor and a battery pack produce a total output of 190 horsepower and 147 pound-feet of torque. Power is sent to the front wheels and gets the car from nought to a 100 kmph in under eight seconds. The Concept Active Tourer Outdoor has a pure electric range of up to 19 miles, a top speed of 198 kmph hour and claimed fuel economy of around 40 kmpl. What’s special about the car, is the transformable compartment which can be found behind the rear seats. Its capable of stowing two bikes on built-in, retractable carriers and once the front wheel and seat from the bikes have been removed, the frames can be locked into place using two rails and brackets. The wheels can be stowed in a holder attached to the right rear seat, the saddles can go into a compartment in the load floor. If you need to make a quick adjustment or a fix, you can do so since the bikes are aligned across the load bay.

The Concept Active Tourer Outdoor, which by the way doesn’t look like a 21st century concept at all, gets tough interiors to take on the wild outdoors. The load floor is a studded plastic in MoonRock Gray, the forward parts of the cabin are in MoonRock Gray and MoonWhite leather, plastic, Alu Mesh and Steron trim. Gold Race Orange trim inside matches the color of the body outside, and the wagon rides on 20-inch wheels. 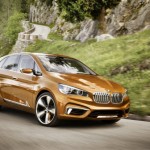 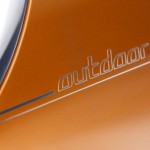 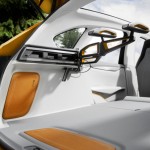 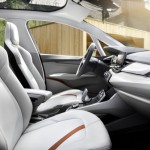